Virtual Reality: The Road to Dystopia? 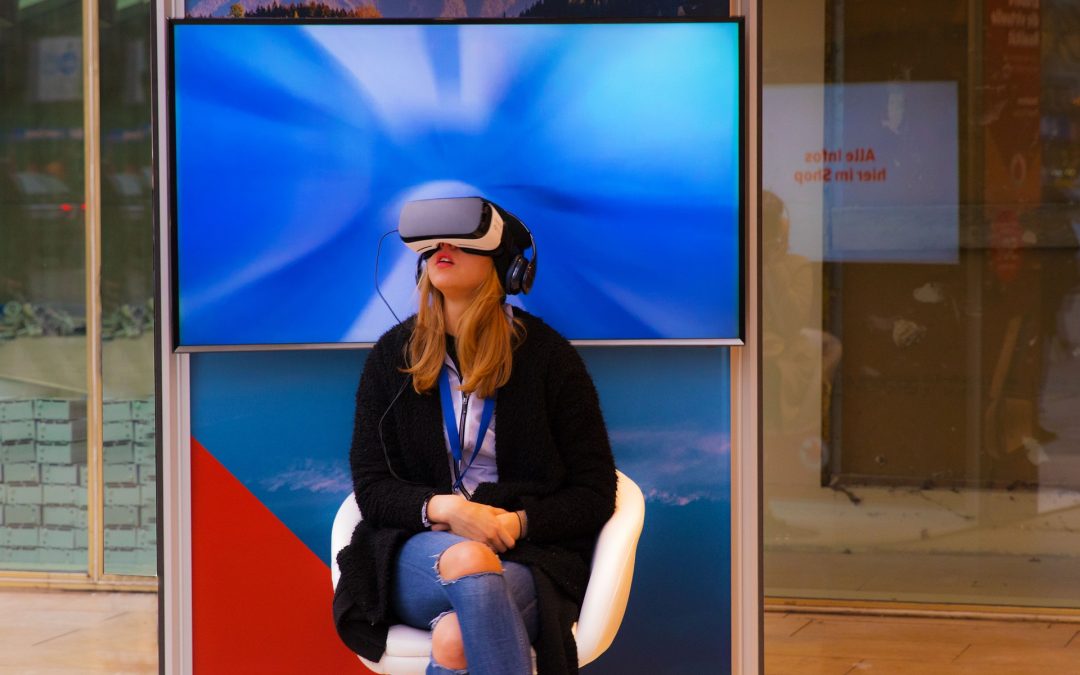 I visited the VR Columbus Meetup group last week at the Columbus Idea Foundry. VR Columbus is an association of Virtual Reality (VR) and Augmented Reality (AR) enthusiasts: developers, artists, entrepreneurs, or just interested parties. This crew is hip to the latest VR technology—I even got scanned while I was there: 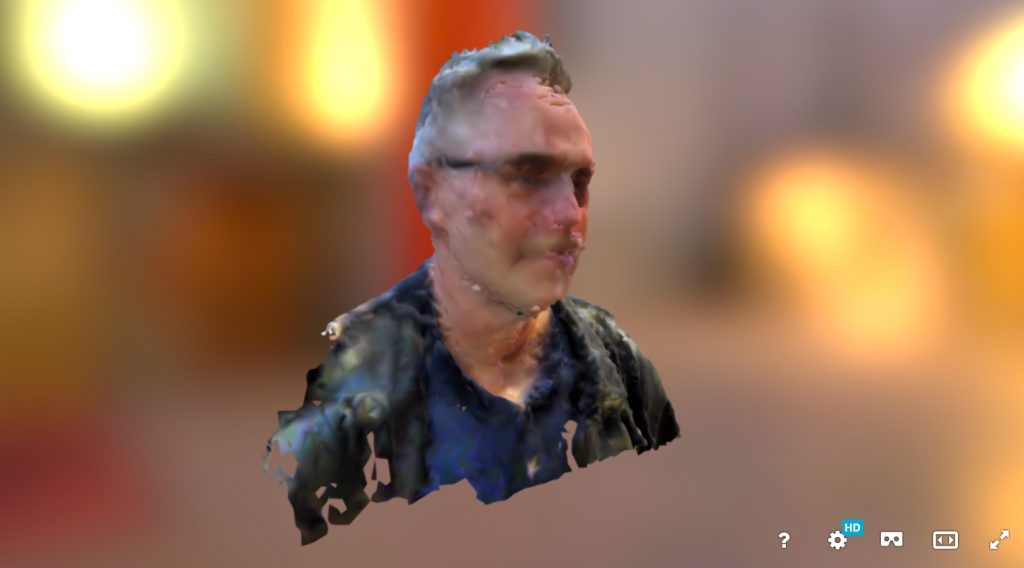 Okay, it’s kind of crude, and a little creepy-looking, but it was done in a few seconds with a cell phone while the man (his name is Nathanael) walked around me as I tried not to flinch. I hope that when we make the transition to the virtual world, my avatar will look better than this!

Since a big reason for joining the group is to do research for the next two books in the Shredded series, a number of members told me their favorite works in the genre of VR-themed dystopian fiction, none more often than Ready Player One, the 2011 novel by Ernest Cline. Ready Player One tells the story of Wade Watts, a social misfit obsessed with gaming and steeped in 1980s pop culture. In the globally-warmed, post-fossil-fuel America of 2045, Wade escapes his hellish real-life existence by spending nearly all of his time in the OASIS, a massive virtual universe created by gozillionaire James Halliday. When Halliday dies, the world finds out that he’s bequeathed his entire estate to the finder of an Easter egg hidden somewhere in the vast OASIS. After years of trying, Wade, in the person of his OASIS avatar Parzival, has a breakthrough, taking the lead in the race to find the egg and to claim Halliday’s fortune.

Ready Player One describes future VR technology and the features of the OASIS in detail. Naturally, I contrasted the world of RP1 with the world of Shredded, revealing some interesting differences. An important example is the nature of personal privacy in the two works: in RP1, avatars in the OASIS are anonymous, identified only by their avatar aliases, untraceable to their real-life owners, and resembling their owners only to the extent that they wish. It’s natural that this would be the case, given the history of OASIS as a massively parallel, multi-player gaming platform, in which the avatars are fictional characters in a fantasy world.

Things are quite different in Shredded—the Worldstream is a virtual alternative to Real Life. All transactions in our world that rely on knowing the identity of the other person are conducted in virtual space. The Worldstream of Shredded, unlike the OASIS of RP1, enforces an avatar’s resemblance to its owner; any avatar that is not associated with a known person is prohibited. In RP1, privacy is sacred; in Shredded, it’s nonexistent.

At the VR Columbus meeting, I ran into Anthony Russell, CEO of Ohio Web Solutions, a partner to Full-Stackers, providers of web-based services and solutions. Anthony’s latest project is to use VR technology to provide a remote, full-immersion experience for live events, from multiple viewpoints. We discussed the implications for personal privacy that VR might have, in particular, whether privacy will be protected or eliminated.

“It will be two separate systems,” Anthony believes. Those transactions that depend on transparency will take place in a space with requirements that an avatar resemble its owner, enforced by some form of technology. “The space in which a person’s avatar could be anything would be reserved for entertainment.” In Anthony’s view of the future, VR venues will be classified as one or the other, but we also speculated that there may be venues with relaxed requirements for avatar fidelity, but which the users would nevertheless want to know that the avatar they’re dealing with bears a strong resemblance to its owner—social networking venues come to mind. In RP1, Wade is infatuated with a female avatar named Art3mis, but can’t shake the suspicion that she’s actually an “obese, hairy-knuckled guy named Chuck.” In Shredded, the Worldstream synthesizes a person’s avatar from images and audio captured by the Internet of Things, ensuring that an avatar looks like its owner with only minor differences. A person can “spoof” the Worldstream, appearing as someone else, but only for a limited time, and at the risk of being sanctioned by the Worldstream.

In both books, VR technology is expensive. RP1 describes elaborate—and expensive—immersive VR gear in great detail, down to the omnidirectional treadmill and the odor synthesizer. Shredded is less specific, but the Dermal Contact Neural Interface, a.k.a. the Belt, capable of inducing whole-body sensations, is a pricey item that few can afford. Will the cost of technology always be a barrier to the widespread adoption of immersive VR? “The basic rule of supply and demand will apply here,” says Anthony. “The newer the technology and the fewer people [that use it] creates a demand that forces the manufacturer to raise the price to cover the cost…As time goes on the basic technology will be adopted by others and more manufacturers will rise to recreate the technology, therefore…making it affordable for the average consumer.” Some of the applications that could take VR to the tipping point include training & education, advertising & promotion, and virtual shopping. Says Anthony, “In the future…VR will become as commonplace as email.” Other applications, such as virtual business meetings, remote socializing, multi-player VR gaming, and public events will similarly drive support for virtual venues in which many people can interact via their avatars.

This all sounds wonderful—so why do both RP1 and Shredded describe the real world as a decaying hellscape? The two books posit different roads to dystopia. RP1 tells of a world that has succumbed to exploitation: its fossil fuels have been mined to exhaustion, the environment has been ruined, the population crowded into barely inhabitable “stacks” of mobile homes on makeshift scaffolds. The OASIS, developed as a gaming platform, becomes an escape hatch for a whole generation. The world of Shredded is the victim of neglect—as the bulk of human activity has migrated to VR, vastly improving efficiency and productivity, the incentive to maintain the Real World has dwindled; as fewer people spend less time in the Real World, the consequences of neglect cause fewer complaints.

But reality’s slow surrender to entropy may not be the most significant outcome. “The inevitable consequence of a world-wide migration to VR for human activity would not be the deterioration of natural resources, but negligence of innovation in the real world,” Anthony explains. “If everything is provided for in the virtual world and humans are able to have the same experiences if not more than they would in the real world, then the only need would be to make sure the environment in which they insert themselves into the virtual world is habitable.”

Indeed, the infrastructure to support a finely-rendered, viscerally realistic virtual world for massive numbers of users would have to be monumentally huge. With limited funds available, might we see a flight of money and resources from the population centers, with their inhabitants comfortably jacked into their virtual surroundings, to Death-Star-sized data centers, built where energy is cheapest and the cost per compute cycle the lowest? And if the default venue for human activity is a virtual one, might we also see an exodus of innovation, from our drab existence to ever-more fantastic, but fictional worlds?

We may have a dystopian future ahead of us, but if we’re all holed up in our bio-cubes, within the range of an acceptable variety of drone-delivered food, equipped with a bathroom and a fat pipe to the virtual universe, we might not care.